A New Face (and Place) for the Arts & Crafts Cabin 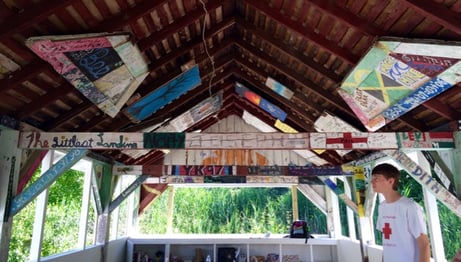 Arts & Crafts is always an integral part of any great camp program, and at Pecometh, this has certainly been the case since 1946. However, the Arts & Crafts Cabin near the pier was run-down and needed a facelift… and a move.

There were two big questions: How would the project be funded and who would do the work?

It all started with former counselors Debbie Clark and Lynn Coleman Smarte in the summer of ‘68. Neither of them came to Pecometh as a camper but they would develop a lifelong friendship as summer staffers.

Debbie was familiar with Pecometh because her siblings came to camp and she came to youth retreats. She came on board as a counselor in 1967, and she met Lynn Coleman (now Smarte) at Western Maryland College.

While there, Lynn couldn’t help but hear about Debbie and another student in their dorm talk quite often about their Pecometh camp experiences. The two wanted Lynn to join them the following summer.

Lynn adds, “It would have taken everything in me to say no.”

Debbie and Lynn both joined summer staff at Pecometh in the summer of 1968, and thus started a lifelong friendship.

Debbie recalls, “Camp was a powerful force in my life. I met some of my best friends and have stayed in touch with them for a long time.”

Lynn adds, “I don’t know what was better, the relationships and what I learned from the kids or the camaraderie with the staff…”.

They had more in common than just camp. They both were education majors, took American Sign Language classes together at the Maryland School for the Deaf (MSD), and even worked at MSD together for a short time.

Flash forward to Valentine’s Day 2014. Lynn and her husband Doug wanted to do something of lasting significance for Pecometh, and something that would honor Debbie and their lifelong friendship.

Turns out that the Arts & Crafts cabin really needed a facelift, so Lynn and Doug underwrote the project in honor of Debbie.

Lynn said, “She would never seek out awards or honors. Since I thought of Debbie as the Crafts person, and Pecometh means so much to her, it just seemed like the perfect gift.”

Debbie was “Gobsmacked!” when Lynn told her the news.

“I was extremely honored and humbled. I’m really thankful that the camp is there.”

After the Smarte’s had made their commitment to underwrite the renovation, Bud-d Landing, Pecometh Facilities Director, got to work. He consulted with current and former staff to retain the best of the original design, while adding features that would serve campers and guests well into the future.

Best of all, Bud-d figured out a way to retain the summer staff signature art that adorned the walls.

Bud-d worked with a contractor to secure the work and everything seemed ready to go. Then the contractor landed a big job that prevented him from being able to complete the work before summer camp.

Rather than looking for another contractor, Bud-d went to some of his “Go-To Volunteers,” including Charlie Hunter, Michael McCloskey, former Pecometh Executive Director Tom Carter, and Tom VanDrunen.

Charlie Hunter, prior to coming to Pecometh as a volunteer, worked for a United Methodist camp in Pennsylvania, and his wife was a Pecometh camper years ago. During this project, he was a major contributor to the work on the cabin frame, siding and its lighting.

Was Charlie pleased with the changes made to the cabin?

Former Pecometh Executive Director Tom Carter retired from Pecometh 15 years ago, but mentioned that he and his family have been involved with various work projects around Pecometh every year since.

He got the call about the cabin project from Bud-d back in May, and Tom assisted in the project with new framing, as well as with installing new plexiglass windows.

What was the most rewarding part of this project, especially with Tom’s extensive Pecometh background?

“Being able to maintain and keep the artwork from past years. Also, it’s a renewed facility for the campers.”

(Anyone who's on staff for 3 summers, or anyone who serves a summer as the Arts & Crafts Instructor, gets to claim a spot to creatively put their name and years worked on the cabin. There are also some staff paintings in the cabin from before the “rule” was instated.)

Tom VanDrunen never went to camp himself, but started coming to Pecometh retreats in the early ‘80s. Both of his daughters went to camp here, and later they both came on summer staff at Pecometh.

Tom was instrumental in moving the cabin 15 feet closer to the Chester River.

“We moved the cabin sideways the same distance as it is wide (about 15 feet).”

What was his most rewarding part of this project?

“Being able to help new campers, and also having the Gospel continue to be proclaimed at Pecometh.”

There were others volunteers who assisted Bud-d with this project, and all were pleased with the final result.

You can see the Arts & Crafts Cabin during Friends & Family Camp in 2016, when we'll be celebrating Pecometh's 70th anniverary!

You’ll go back in time seeing staff artwork from years gone by, and you’ll be reminded of the promise that future Pecometh campers will bring in the many years to come.

For more details, see photos of the project on our Facebook page.