A New Home for Our Oyster Babies 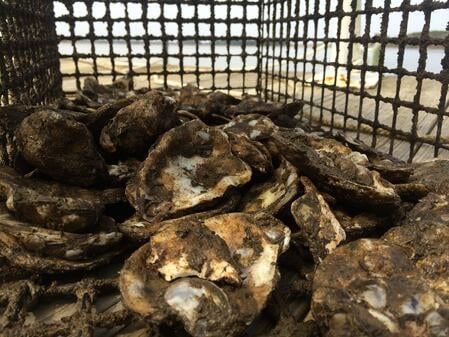 We at Pecometh Camp and Retreat Ministries recently made an impact on the nearby environment, both with the cleanup of the Chesapeake Bay and on the local oyster population.

Last summer, an associate from the Chester River Association suggested that we might want to be involved with the Marylanders Grow Oysters program.

But, why oysters? They play a vital role in helping to strengthen the life of the Bay by feeding on plankton and filtering it out of the water. It’s just like a filtration system for the water that comes from your tap at home.

We then jumped at the chance, and knew it could definitely be an opportunity we could share with guests, school groups and also the day campers that attend our “Schools Out, We’re In” program during the school year.

In October 2013, our day campers did experiments in which they observed turbidity (how cloudy the water was due to particles of dirt and other matter in the water). Megan Shitama, Retreat Programs Coordinator, commented that it was a great “hands-on thing to do with the kids.”

After nine long months, in May of this year, we placed the spat, now growing oysters, were placed in a new home in Lankford Bay, at the southern end of the Chester River. It will take about three years for them to grow to “market” size.

This recent effort shows us that we can all take time to improve the quality of our rivers and streams, and ultimately, the life of the Chesapeake Bay.

We’ll keep you updated on the progress of the oysters as they continue to thrive in their new habitat.

Renewing the Face of the Earth: Tree Planting Project on Volunteer Day

Pecometh Challenge Course: Building Individuals... One Team at a Time