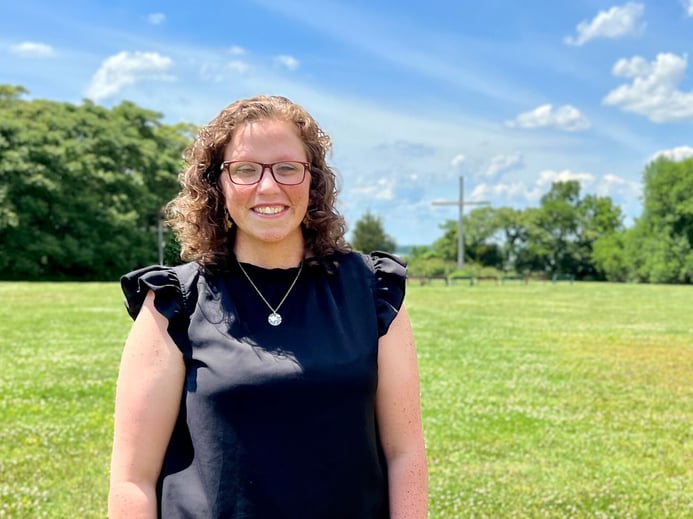 When Chelsea Spyres was in middle school, her parents asked her to make the choice between attending Camp Pecometh each summer and going on mission trips with her youth group. Even with financial assistance, her family could not afford both.

This was a difficult decision for Chelsea! As a camper she had experienced the power of Christian community. Meeting campers and staff from different backgrounds, and even different countries, opened her eyes to how broad and diverse God’s family is. And during a Galilean service one year, she had heard God calling her into ordained ministry.

Even so, Chelsea’s heart for service led her to say “yes” to missions. Through these early mission experiences, she discovered that she has a passion for serving those on the margins. She went on to work at mission camps during her summers through college, and after college she served for two years as a United Methodist Global Missions Fellow in Detroit. She never regretted her choice to pursue mission work, but she still wondered what she missed out on by not serving at Camp.

Her opportunity to come back to Camp came when she moved home from Detroit and began serving in local church ministry as a seminary student. She was invited to volunteer for a week as an “SLC” (Spiritual Life Coordinator), leading Bible studies and worship experiences for summer camp.

“That first year was both really exciting and I was really scared,” she says. “I questioned if I was 'enough' of a pastor to be SLC for the week.” Being invited to serve in this way felt like a recognition of her call to pastoral ministry, even though she was still a seminary student and not licensed or commissioned as a clergyperson.

For Chelsea, this was an opportunity to say “yes” to the role of pastor: “It was a gift that first summer to live it out in a place where I had heard God so many times.”

Now Chelsea has served for three summers as an SLC, and is serving as an associate pastor at Grace United Methodist Church and the lead pastor of Riverfront Church, both in Wilmington. She continues to treasure her opportunities to return to Pecometh’s sacred space through so many ages and stages of her life, including her recent time away at Pecometh writing her commissioning paper. On June 10, she graduated from Peninsula-Delaware Conference Licensing School at Pecometh, and expects to be commissioned as an Elder on June 18.

We give thanks to God for ministry leaders like Chelsea, who give back Pecometh’s camp program through their prayers, presence, and pastoral leadership.

Pecometh Story: Not the Best Week of My Life