Swing Unto the Lord: The "Soul-Searching Swing"

Over the past few months, you may have noticed a new structure that’s located between the Riverview Retreat Center (RRC) and the nearby Chester River. It’s quite large, very sturdy, and very relaxing.

Brad Powers, President of the United Methodist Men from St. Mark’s UMC in Easton, MD, recently came to Pecometh for a Walk to Emmaus weekend in November 2013, and noticed that there was no large place to relax or sit around the outside of the RRC to enjoy the grounds.

He had a thought that maybe some benches or something similar could be added to the area.

Phil Rekitzke, also with St. Marks and a major supporter and catalyst on this project, saw a similar type of swing while on retreat in Pennsylvania.

Phil and Brad then came together and knew something needed be done.

So, in May 2014, Frank Meyerle, Jim Scott, and Church Treasurer Bob Lawrence, all with St. Mark’s UMM, were brought on with their design experience and became the leaders of this project.

Between the five of them, approximately 225 hours of planning time were logged in this effort.

Phil talked to Pecometh Executive Director, Jack Shitama, and the go-ahead was given.

Ground was then broken for the construction of the swing the first weekend of September.

During this process, 14 men, both young and old, came to help in the building of the swing.

Brad adds, “This whole project brought all of us together.” 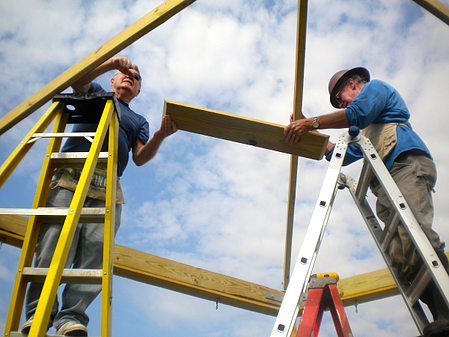 Slowly, over the course of the next few weeks, the structure began to take shape. The seat, chains, and beams were installed. In fact, those beams that hold the Swing go down four feet into the ground. Also, brackets were custom-designed to hold the entire structure together.

Brad adds, “No one had carpenter experience with this project. They were all volunteers. I especially want to thank Tom Van Drunen from Dover, who came and dug the hole for us with his tractor. “

One special touch were the signs that you see on each of the cross beams of the swing.

They include, “Grace,” “Hope,” “Prayer” and “Fellowship,” and also one that has the name of St. Marks UMC in Easton.

Brad also pointed out to me that if you look carefully, you’ll also notice that the background color of the signs on each side of the swing perfectly matches the red siding of the RRC itself.

When I asked Brad who came up with the name, he said that distinction belongs to Phil.

Phil adds, “...it just came to me. I don't know if it was divine intervention, the move of The Holy Spirit or what...but I sure do give God all the glory!” 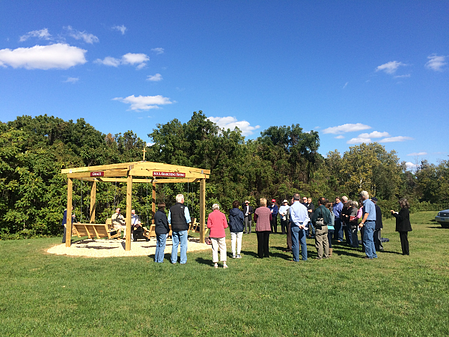 There was a large number that came out to celebrate the work that had been done and to give glory to God.

Regarding cost, Brad said that their initial cost to build the structure initially was projected at $3,000. Once the project had been completed, the final cost came in at just under $3,600. The entire cost was covered, thanks to some very generous donors.

When the project was almost completed, he sent out this email that reads in part…

“I want to thank all the men who have worked so hard on this project.  I believe that we envisioned a “God-sized” project that will benefit folks who visit the Retreat Center for generations to come. “

“I'm very confident the Holy Spirit will use that place to facilitate Godly conversations & fellowship.”

The next time you’re at the RRC at Pecometh, come on over and sit a spell in our new Swing.

Search your soul, and there you will find your mind refreshed, and your spirit renewed.