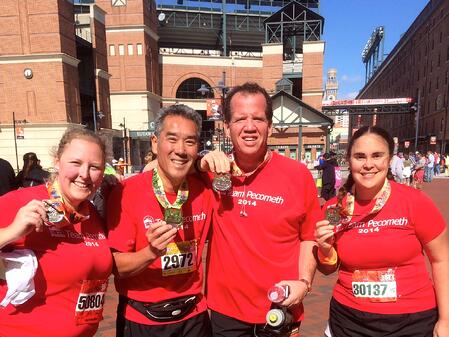 The Baltimore Running Festival: a unique event that, since its inception in 2001, has become a part of the fabric of Charm City itself, due to the dedication, loyalty, commitment and passion of the runners involved. Adding to this fabric were ten runners from Team Pecometh, and this was the fourth year that these runners joined thousands of others.

The event was held this past Saturday, October 18, in downtown Baltimore. Team Pecometh consisted of Team Segar, made up of Tom, Sue, Mike and Samantha Segar who all ran the 5K; Chuck Auer, Cathleen Hunter Gough, Rev. Karen Handy, Amber Thorburn-Humphrey, and Rev. Rick Vance ran the half-marathon, and Pecometh Executive Director Jack Shitama ran the full marathon that day.

These men, women and youth were privileged to run these respective races...all with the goal of raising funds for Pecometh Camp & Retreat Ministries.

For four members of the team, this was their first time running in the festival. It was Chuck Auer’s second time competing and Team Segar's third year. With the team’s numbers coming in at 10 this year, it ties the record for the most participants Pecometh has sent to the event.

Last year, approximately 27,000 runners were a part of this large gathering.

Many sponsored these runners, supported them through fundraising, both online and in person. and at the time of the run over $3,600 was raised. A meaningful impact was truly made for Pecometh that day, as it has been done in recent years, as well.

But, what is the real reason why these ten ran and why is running for Pecometh so important to these men and women in the first place?

Tom and Sue Segar, and their children, Mike, 19, and Samantha, 16, together make up Team Segar, and this was the third year they have all run in the Festival.

Mike and Sam are long-time campers and Mike himself has worked on summer staff for the last two years. They all ran the 5k this year.

"Three years ago, I was newly recovered from knee surgery . . . . . . at the time, I thought I would never run again, but after my physical therapist gave me the green light, and when Jack Shitama put out the call to have people join Team Pecometh, I thought this might be the catalyst for getting back into running.

Two things I was passionate about….Running, because I grew to love it about 10 years prior, when I helped a friend coach High School Cross Country...

...and Pecometh, because of its life-changing experience for kids - I witnessed kids I'd coached and my own kids grow in their walk with Jesus.

I continue today not because of my love for running--I have lost all ambition to be a running athlete--but for my love of Pecometh and what it means for all of the people who have experienced it. “

Wise words from a mom who’s been there, done that, and did it once again this year. 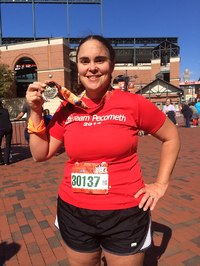 Cathleen Hunter Gough, who ran the half marathon this year, has a bit of a different story. She worked on summer staff at Pecometh for five years (from 1999 to 2003), and moved up the ranks from counselor to program coordinator.

So, how did she make time for running? Jack Shitama remembers her passion.

“I recall seeing Cathleen running early in the morning. This took real dedication because the summer camp schedule is extremely demanding.

Staff duties go from about 7am until 10:30pm, so running regularly was a real challenge.”

Cathleen explains further why she enjoyed running in the morning.

“I loved getting up early and running at camp when everything was quiet and the steam was coming off the ground filling the air with the humidity of the day.

The only sounds were the birds, insects and the occasional squeaky cabin door as everyone started stirring.”

For Pecometh Executive Director Jack Shitama, running gives him not only the opportunity to take a much-needed break, but it gives him a focus on what’s really important.

“For me, it’s a mind, body, and spirit thing. It really is a spiritual time for me, and a time for meditation, as well.”

He started walking on a treadmill in his home in 2009, and then progressed to running on it. By 2010, he ran his first 5k, and then a half-marathon in the fall of that year. He then started thinking about doing his first marathon in 2011.

He truly enjoyed the opportunity to run the full Marathon at the Festival again this year. You can read more about his running journey here.

Baltimore Running Festival Event Coordinator Lee Corrigan made the following closing remark in a letter to all runners before the race.

So much more than greatness was on the minds of some that day. In the end, I believe that the entire day can be summed up best in the inspired words of the apostle Paul, when he wrote,

You’ve all been to the stadium and seen the athletes race. Everyone runs; one wins. Run to win. All good athletes train hard. They do it for a gold medal that tarnishes and fades. You’re after one that’s gold eternally.
I don’t know about you, but I’m running hard for the finish line. I’m giving it everything I’ve got. No sloppy living for me! I’m staying alert and in top condition. I’m not going to get caught napping, telling everyone else all about it and then missing out myself.

Packing Tips for a Fantastic Week of Camp!