Volunteers Raise the Roof at the Dining Hall 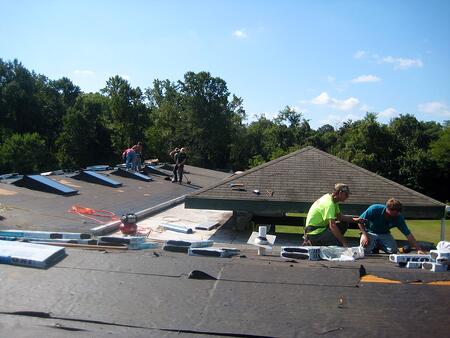 From September 19th to the 21st, a group of volunteers came to the Pecometh Dining Hall with one purpose: to raise the roof…literally.

Under the leadership of a local contractor, Kirk Christophel, and Pecometh Facilities Director, Bud-d Landing, this team of men, women and youth volunteered their time and efforts in stripping off the existing (and aging) roof, and then laying the new tar-paper and shingles.

They worked as one and came together through fellowship and sharing meals.

The old roof on the Dining Hall was 20 years old, and desperately needed to be replaced.

The team was also prepared to to do other work, as needed. Bud-d explains. “It’s as simple as stripping off old shingles and putting on the new ones. If there is structural damage that’s found, we’ll fix it, then and there.” Many of the supplies used in this job were already delivered to the job site ahead of time and were ready to be used.

Meals were provided by Chef Chris and his team, and those involved with this project stayed at The Talley House on campus.

My Time On the Roof

On a personal note, when my family and I got to the job site on Saturday morning, I found the volunteers hard at work.

Bud-d told me they started on Friday and worked from about 8am to 5pm.

I started taking pictures from the ground and then went to the ladder (only a few rungs up)  to take some more.

Bud-d then came to me and asked if I wanted to go on the roof.

The next thing I know, I’m riding on the front of the tractor with my notepad and holding on for dear life, thinking “I’m ready to go be with Jesus if I fall from this thing.”

Fortunately, I did not. I made it to the roof, starting taking pictures, and talking with the brave ones who were doing this job.

I ran into John Hauprich, a member of Kent Island UMC. “John, have you ever done this kind of work before?”

He replied, “I’ve never been on a roof before. I’m just a regular Harry Homeowner kind of guy. I do find the work easier once I get going.”

Brave words from a brave man.

I also met Steve Christophel, Kirk’s son, who was assisting John in his work. Steve came prepared with the proper tools and certainly knew what he was doing.

All the volunteers had smiles on their faces, and enjoyed what they were doing.

After about 30 minutes, my nerves had gotten the best of me. I looked for Bud-d, and let him know that I was ready to come down. Here came the tractor and I took the ride back to terra firma, which was actually easier than the ride going up.

My interview with Bud-d continued. “What about the new roof? How long will it last?”

He also told me that when his team started stripping off the roof, they found a tongue and groove system that was in place, and he was currently in the process of determining the exact age of the old roof (and the Dining Hall itself). It’s possible the roof structure, itself, dates back to the 1950s.

The jury, I believe, is still out on that one.

Regardless, Bud-d is really pleased with the effort and the result. “Everybody worked so hard and we got an amazing amount of work done!”

With the work now complete, I can safely (and I do mean safely) say that the new roof that Bud-d, Steve, Kirk, John and the volunteer team installed this past weekend, will stand up to the unpredictable weather of the Eastern Shore, and offer shelter and protection to many campers and guests for many more years to come.

You can check out photos of this and other projects on Facebook in our 2014 Volunteers Album.

Thanks to our Raise the Roof Team:

We couldn’t have done it without you!

Update: Thanks to the hard work of our volunteers we cut the cost of the Dining Hall roofing project almost in half!

Our fantastic volunteers and donors really make a difference! If you would like to help fund this and other projects like it, consider donating to our 2014 Annual Appeal and designating your gift toward Capital Improvements.

Summer Camp 2021 By The Numbers